Russell Island in Redland City is the biggest of the Southern Moreton Bay Islands, sandwiched between the mainland and North Stradbroke Island in the state of Queensland, Australia. The island is eight kilometres long (north-to-south) and nearly three kilometres wide.

A basic survey of the island was conducted by Robert Dixon in 1839. He named the island after Lord John Russell the Secretary of State for the Colonies in the 1840s.
The island was first settled by Europeans in 1866, when John Campbell was granted a lease on the northern end of the island closely followed by John Willes and his family. Land auctions commenced in 1870.[1] Farmers and oystermen were the first full-time inhabitants, but with the arrival of the Jackson family in 1906, a small village was created on the western side of the island called Jacksonville, that had a sawmill, pineapple canning factory, jetty and even a picture theatre. A small school was opened in 1916.

The two licensed clubs, an RSL and the Russell Island Bowling Club, provide entertainment and bistro facilities most nights of the week.
A Council-built hall near the main wharf is available and, centrally located on Jackson Street, the Bay Islands Community Centre has rooms. Some church denominations meet at the hall but others use the historic St Peters Church Hall just up High Street. In 2009 the Kennedy Farm Community Centre was revamped with Commonwealth money and is now available for small scale community activity. Resident driven plans for the 4.5 ha block include sporting facilities and a community farm.

Electricians, builders and plumbers are resident on the Island, making the island somewhat self-supportive. Services include power, phone, broadband, water and garbage collection but sewerage and tarring of the vast majority of streets is still some time away. Garbage is trucked to the mainland for disposal. The Rural Fire Brigade, State Emergency Service and the Ambulance service receive strong volunteer support. Several volunteer Justices of the peace live on the island. A small primary school for around 180 students has an active Parents and Citizens club. In early 2010 the Bay Islands Community Centre with grants from Community Service and the Council, opened a youth drop in centre on Jackson Road.

On 12 April 2008, a public 50 metre swimming pool jointly funded by the Redland City Council, the Queensland State Government, a rates levy and nearly 20 years of donations from residents was completed. Management has been contracted to the YMCA. The first bathers hit the water during that weekend but, lacking any heating, it was closed for the winter. Sufficient solar heating for spring and autumn use was installed in 2009.

The first settlers on the island relied on their own resources to take themselves and their produce to market. The area to the east of the current jetty was the site of the rafting ground, where the timber-getters would form log rafts to float their timber to sawmills on the mainland. The island’s early farmers also used this area to ship their produce before jetties were built.

The jetty accesses Krummel Passage. This passage was formerly known as the Mersen or Marsden Channel, named after Christian Mersen, who selected a couple of parcels of land on Russell Island in the 1870s. He set up a lime burning kiln where he burnt local coral and oysters. This kiln was close to the lime burners’ jetty near the present water transport office and current jetty.

In 1922 Fred Willes, son of John Willes, donated half an acre of his farmland to the Anglican Church for a proposed hall. Church services had been held in the house of Mr and Miss Hender until then. The hall was built by Joseph Lovell and his son, Bill, of Macleay Island, from Russell Island timber milled at a sawmill on Canaipa Road. The hall was officially opened on 30 March 1924 and was extended in 1959. Electricity was connected in 1966 and town water in 1994. 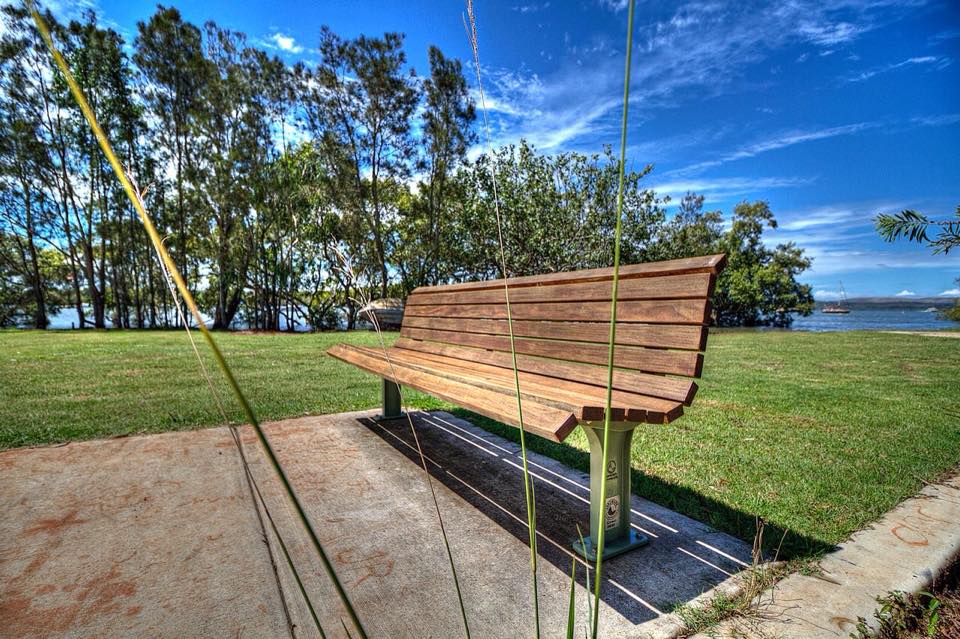 This park is named after returned serviceman Jock Kennedy, who moved with his wife and family to an 11 acre farm on Russell Island after World War II. Their avocado and banana farms bordered the northern end of the island during the 1950s. Like many islanders, Kennedy was involved in community activities, such as the Russell Island Youth Club, where teenage boys used to learn boxing and other sports. He is also remembered for the dances he organised. Jock and Joan Kennedy devoted much of their own time and resources into developing what is now known as the Jock Kennedy Park. The Kennedys eventually moved to Wynnum. 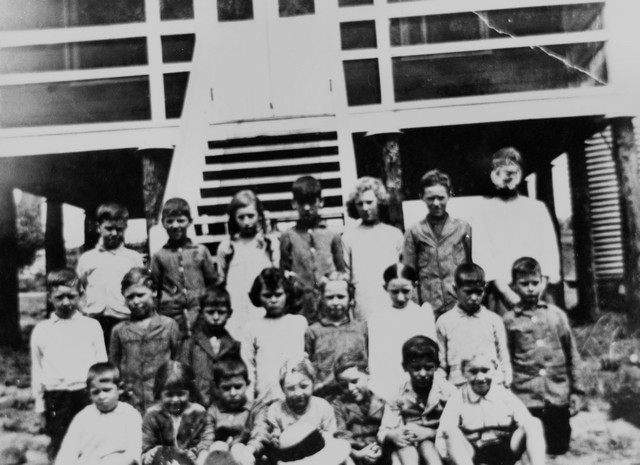 The first school on the island was carried across the bay on a boat, and opened near Black Cat Swamp (now known as the Minjerribah Conservation Area) in 1916 on land donated by James Jackson, Mark Jackson’s father (see Jacksonville). In 1926 the school was moved to its present site. The first teacher was Eileen Willes, a granddaughter of John Willes (see Canaipa Point). In those days, schools were more than places of learning, with the school building doubling as a community hall and meeting place. Long-time residents still remember the dances that were held at the school.

This is the site of a settlement established by Mark Jackson in the 1920s. The Jackson family came to the island about 1905 and took up pineapple farming, one of the first farming families to do so. In 1915 Mark Jackson opened a pineapple cannery that employed up to 20 people in its heyday. It is famous for being one of the suppliers of canned pineapple to Allied troops fighting in France during World War I. Not long after World War I, the cannery closed and was replaced by a sawmill on the same site. Before the mill closed, it supplied timber for a number of island buildings, including a Methodist Church.

The pineapple cannery was built just above the high water mark, apparently because the equipment was too heavy to carry any further up the slope. Mark Jackson also built a jetty and a barge to take produce to the markets, as well as an enclosed swimming pool with a shark barrier. The remains of the structures can be found at the water’s edge below the site of the cannery and sawmill. No settlement is complete without entertainment, so Mark Jackson also built the Bay View Picture Theatre about 1950. Jackson donated five acres for a school oval in 1922, which is today the Jackson’s Oval cricket ground. In its heyday, Jacksonville was one of the main transport nodes, with most of the fruit boats visiting the island in those days travelling along the aptly named Main Channel that runs between Redland Bay and Russell Island. They picked up and delivered passengers and produce from the Logan River, other southern bay islands and the mainland settlements. Little remains of the Jacksonville settlement: the Methodist Church was eaten by white ants and pulled down and the picture theatre burnt down in 1960. All that is left of the pineapple cannery/sawmill are its levelled site and some remnants off Jackson Street. The remains of the jetty and barge can be found down on the water’s edge and some concrete block walls from the swimming enclosure are visible. 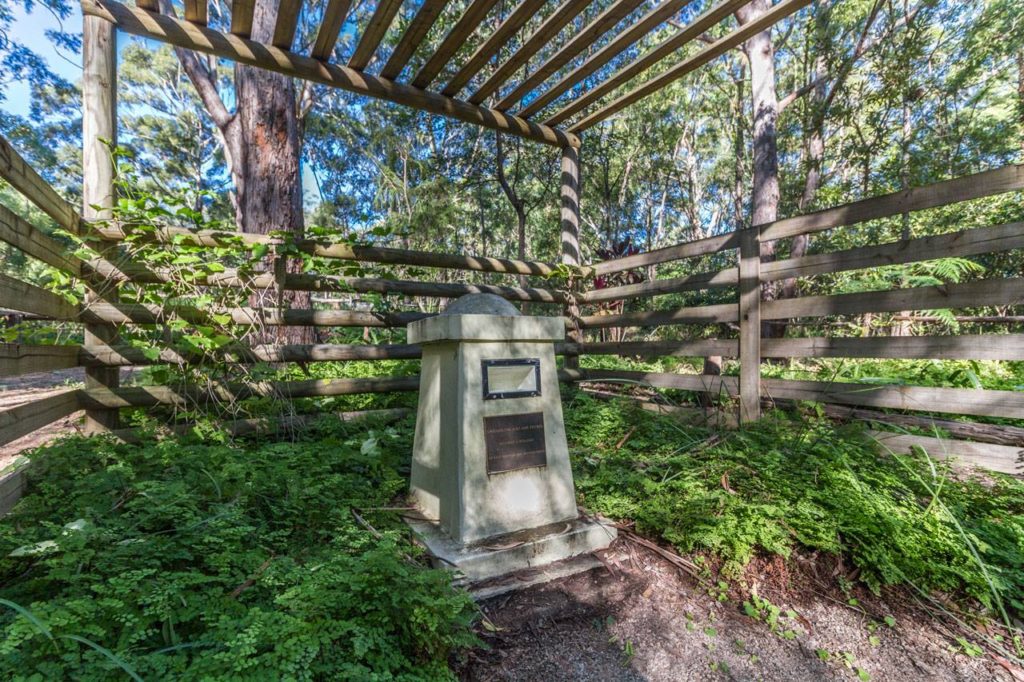 Jay Fischer took up land on Russell Island in 1906, beginning with 120 acres and adding another 80 acres later on. The farm was between Waikiki Beach Rd, Flinders, and Leigh Crescent on the southern end of the island. The farm was called Rehcsif – Fischer spelt backwards. Jay and his wife, Gwendolyn, grew fruit and vegetables, and they also set up a pineapple pulping factory and made jam conserve. The farm did not do well and Gwendolyn had to sell some of the land to pay off debts after Jay’s death.

When Gwendolyn died in 1943 her ashes were brought over to the island and placed in a memorial on their land near the end of Cannes Avenue. The ashes and her favourite greenstone brooch were placed in the headstone behind a glass panel. Some years later the stone mound was accidentally bulldozed. The family rebuilt the stone monument and a memorial garden with the help of Mission Australia and the Bay Islands Community Services, but the brooch and the urn with her ashes were lost. Local legend has it that the grave site is haunted. 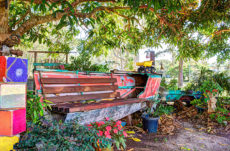 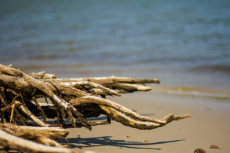 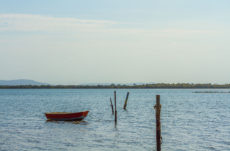 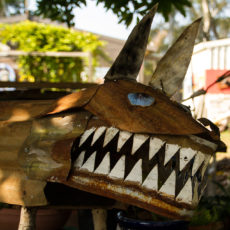